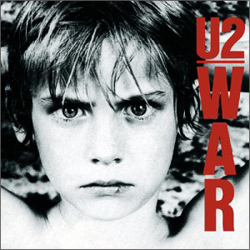 When February blew in this year, there was an immediate rush to celebrate U2’s 30th anniversary release of the War album. I decided to take the high road and sort of waited to celebrate closer to the actual release date of February 28th and then praise the record, which I am surely doing with this short posting.

What makes the War album special in U2 history is how it launched the band onto the world’s stage. The first two records knocked on the door and third one, War, opened it. It was U2’s first true political record and a turning point in the band’s narrative. They were no longer singing about youth and religion. Instead, they were making music, pinpointing bigger issues outside of the four members. What was great the record was they were blooming and not afraid of taking a stand. They are however Irish and tough blooded men. With Larry’s ferocious drumbeat and Adam holding the low end, the band was now making rhythm an anchor of the narrative. In addition, the musical landscape was changing around them as well. The punk movement had dies and MTV, now a major player in the business, was pushing fluff. Yes, there were videos released from this record in order to build the band’s base, but it was still a grass root effort. Once you heard the record and let it sink in, no matter how you listened to it, one became hooked.

I am surprised that the band has never revisited some of the tunes on recent tours. Yes, I know there is Sunday Bloody Sunday and New Year’s Day, but they have never marched out Two Hearts Beat As One or The Refugee much like they marched out the Electric Co from Boy on recent tours over the past decade. It is my feeling, that the second level tunes on this record, are just as solid as the up-front war-horses, excuse the pun. However, with an impending album release and tour to follow, it would be great for U2 to make a nod to this record and delve deeper into it for the simple reason that this album made them who they are today.

by Eric
Irish, The Joshua Tree, U2, Where The Streets Have No Name
0 Comment 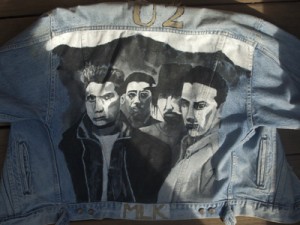 I cannot believe it’s been 25 years since the release of U2’s epic album, The Joshua Tree. First off, the album has stood the test of time. Secondly, I have gotten older. Actually, we, who were in college during that era of the band, have all gotten older but still remember the day the album broke. It’s equivalent would be The Beatles’ Sgt. Peppers or The Rolling Stones’ Exile on Main Street hitting the street. Take your pick of the enormous catalog of great albums released during one’s college years and U2’s sits with the finest. Stealing from The Doors, U2 “broke on through to the other side” with this record. It launched them into the stratosphere.

In a day in which albums were created almost by an algorithm, or as we called it “by formula” i.e Phil Collins, U2’s album was quite the contrary. U2 created something fresh. There was a story behind each of the 12 songs and the album built a tension, especially if you bought it on a compact disc. (History lesson: it was the first album ever to be released on CD, cassette and vinyl at the same time.) From the opening track of Where The Street Have No Name to Mothers of the Disappeared, The Joshua Tree was a reflection of America with a hint of Irish ambition. Even better, the album’s artwork was a reflection of the starkness of the songs. It was a cut-to-the bone record about America’s interaction with El Salvador in Bullet The Blue Sky as well as visiting U2’s favorite narrative, Christianity. The contrast, or as artists call it chiaroscuro, between religion and politics is not new to the band, but on this record, one wafts from tune to tune not knowing there on this ride. This is what makes this album special.

What would have happened if this album were released as a double LP as it was initially discussed? I feel it wouldn’t have been as great. Don’t get me wrong. Sweetest Thing and Silver and Gold are awesome tracks, but the album would have been too much for us to take on. I don’t think it would have been as tight. It would’ve fallen apart, just like the second side of The Unforgettable Fire does with it’s huge musical landscapes, only be fitting for an album. I like the second side of that album, but to do it again with Race Against Time, a Joshua Tree b-side, wouldn’t have been a smart move. It would have taken away from the tension of the record. Remember, we are in the vinyl era when The Joshua Tree was released and us listeners to the record had to get our butts off the couch to flip the LP. Therefore, I believe the decision to make it one disc and not two was smart.

As for the image for this blog, this is my reaction to The Joshua Tree I painted it in college, shortly after U2 came to Iowa City Iowa in the fall of 1987. For those who have shirts from that leg of the tour, you will notice that Iowa City is not mentioned on them. Cedar Falls is. They did not play on that campus because the band was told to change venues due to their want of putting up their outdoor stage, which would take seven days to put up and tear down. The University of Northern Iowa didn’t want this to happen or so it was the rumor flying around Iowa City at the time. So, they came to my campus. I bought tickets and had the worst seats in the house, but that didn’t matter. It was U2 and I celebrated the night shortly after by painting this jacket in celebration of this event and landmark record.

I purchased a ticket to Dublin for a flight last Thursday, landing in the early hours of Friday morning. With a little luck from the web, I found a B&B and got some rest near the River Liffey. Hours later, I would emerge from my nap and head out into Dublin’s bustling streets, just to take in the Irish air and possibly a pint or two. Maybe, I would have a passing conversation with a local and discuss the rich heritage of the country or sink deeper into the bar near the hearth where I could keep myself warm from winter’s damp air. Either way, I would immerse myself into Joyce’s city.

The following morn’ would be Christmas Eve, the 24th of December. I would wake wearily, yet excited to be out of America to celebrate St. Nicks Day or Christmas in a foreign town. I would be bathed in excitement, wandering St. Stephen’s Green and taking a gander at the book of Kells. I would find myself the Irish version of Fish n’ Chips in order to fill the order of hunger of the day as I was still fighting jet lag.

Eventually, I would saunter back to my room and slip under the awaiting comforter for a quick afternoon shut-eye, knowing I would be up late to catch midnight mass at a local church as suggested by my innkeeper. My slumber was helpful as I dreamt of travels before to Dublin with my parents in the 70’s long before I was a U2 fan. My father was a scholar in James Joyce and this was a second home for him. When I awoke, I could feel his spirit in the room as the last rays of afternoon’s light broke through the tiny crack between the curtains. My laziness wanted me to stay in bed, but I felt a pre-dinner jaunt would do me good.

I slipped out the front door of the abode and into the evening. There was a slight wind and I clutched the top of my jacket closed while I walked down the unevenly paved sidewalk towards the city center. I was on my way to Grafton Street, a road of many a Joycean romp from my childhood, which was burned into me with pleasant memories. This night would be no different. My pace was brisk and as I approached the fable street, Dubliners were again taking to the streets. There was an air of excitement. One could sense that the something big was about to happen as I saw may burdened by bags swooshing against one another. I paused and took it all in as the light was now above me in a streetlight.

As I stood there, I noticed a crowd gathered across the street. There was singing and cheering. I looked to my left and saw no car approaching as I put my foot down on the cobblestoned street. A fellow Dubliner joined me in the automotive gap and we crossed the street in concert, pausing for a quickly passing taxi that whaled on his horn for our attention. Once upon the other side from where I crossed, the crowd had grown yet there was no pushing or shoving. It was festivity at its greatest as guitars were strummed and the unison signing of Christmas (Baby Please Come Home.) It was a happy Irish gathering and one in which one of Dublin’s own was in the center. It was Bono carrying on with those who would join. I was happy to be added to the group.

I awoke Friday morning after the dream and had a gut feeling that Bono would yet again hit Dublin’s street to busk. I was on my way to Iowa with my wife to see my parents and my grandmother, who is ninety-seven years young. The thought of a spontaneous flight to the Emerald Isle was a passing fancy as I was packing for a different trip, but I had a gut feeling that what has now become a ritual would happen again in Dublin. I leaned into my wife’s ear on Christmas Eve, at midnight mass, and said, “I think Bono was busking on Grafton Street in Dublin tonight.”