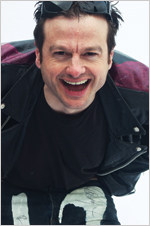 Eric Shivvers is 20 plus year fan of the Irish rock band U2, including 15 of those years as a member of U2’s official fan club, Propaganda and has seen U2 play 18 concerts during the past six tours dating back to the mid-eighties. Eric is an avid music fan who grew up in an academic household where opportunities of travel, exposure to the arts and culture abound. His first foray in rock band fandom began at age seven when he desired to be like KISS’s drummer Peter Criss. Much to Eric’s chagrin, he was given the violin by his mother and expected to practice Mozart under the KISS posters lining his bedroom walls.

At the age of nine, Eric’s musical passion was further set ablaze when he witnessed the punk movement on the streets of London while he was on sabbatical leave with his parents in 1977. Four years later, Eric and his family lived in the South of France where Eric observed the Polish Solidarity marches during Christmas of 1981. Both the punk movement and the Solidarity marches had a profound impact on Eric as well as four Dubliners who would create the band U2.

After college, Eric moved to Chicago as an aspiring art director where he started his career in retail and eventually moved into advertising. During the 20 years Eric has inhabited the Windy City, he has met Bono on the streets for impromptu photos and has seen them play live in various Chicago venues. Eric is currently a freelance graphic designer (www.822design.com) and spends his free time with his wife checking out the great food haunts of Chicago as well as seeing the next generation of musicians pass through his town.