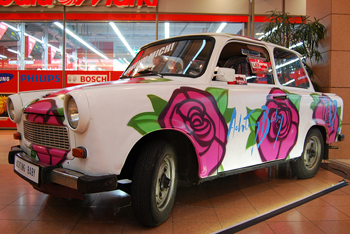 What would your mother say if she heard you say this? Mine would freak. Actually, I would be saying this to my wife. Her response, “where in the hell are we going to put a Trabbie in this 1,600 sq ft condo? I mean seriously! Were you thinking about this when you entered U2.com’s album cover design contest?” I would not hear the end of it. In fact, I am sure the dog and I would be sequestered to the car parked on the street in front of our condo. I would have to beg my wife to let me into our condo, just to use the bathroom.

With that in mind, I am sure the car that U2 is giving away is not from the ZOO T.V. tour. In fact, I am pretty sure it isn’t. I think the one they are giving away was used for some auto show, pushing the 20th anniversary release of Achtung Baby. The real question is what would I do with a car, painted like Mondrian on acid, which probably barely runs? That is the $65,000 question, which I have no answer for and I am not sure many in this competition do. Add to the fact that we are going to have to pay the expenses of taxes and shipping on this item. Since it’s a car, it will need insurance. I hardly feel anyone has thought among those lines, even me.

But there is something cool about hanging a ZOO T.V. era car from your ceiling, if the ceiling would hold it. You could look underneath it and see its underbelly. With this well made East German before the wall of separation came down poduct, you never know if the transmission might fall out or even worse, spill motor oil on your bearskin rug, which would be a bitch. One idea is turning into a lawn planter. You may have to after three weeks of driving it and paying hundreds in your hard earned currency to get it to your house. It may die somewhere on the side of the road, possibly when you are out running groceries. It will become a lemon (Yes, the pun is intended.) because it is made out of pressed cardboard and been out of production for years. But it’s a Trabbie and you won it with your great graphic design, redesigning an epic U2 album. It can’t die.

Oh, I can see it now. You calling Edge on the phone and asking him to come over and fix it. He’s handy, you think since he has all of those guitar effects that make sweet music. He must know how to fix it. Even better yet, let’s call Willie Williams. He gutted these cars for the Zoo T.V. tour and put lights into them. I am sure he has a set of manuals around somewhere. These thoughts run through your head as you sit in the Trabbie on the side of the road with your cell phone that barely has one bar of reception. People drive by slowly just to look at the brightly painted car with smoke creeping out from under the hood. You think the worst.

So, I ask you, what would you do if you won a U2 Trabbie? Me? If it was one of the classics used on the ZOO T.V. tour? Donate it to a museum and keep the headaches away.