To err, U22, is human, to forgive divine 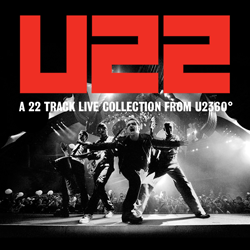 Yesterday, I finally received my U22 booklet and discs. It came to me late because I was moving residences when it was shipped, but I had no fear it would eventually find me. And when it did, I was excited to open it up and start playing the discs.

As Edge’s wah pedal effect on Even Better Than the Real Thing was wondering out of my speakers, I began to cruise some U2 forums in order to see what others were saying about U22. I, obviously was late to the show, but decided not to do this until I had my prized copy in hand. One such forum had conversations that covered the gamut from what we deserved from the band in our membership to U2.com to songs that were not chosen for the final product. I read deeper as the conversations were becoming more catty than analytical. My saving grace from this school-yard behavior came when I fell into a forum in which someone mentions a printing error he caught in the booklet. My eyes took a double take. I turned around in my chair and retrieved the U22 booklet out from of its protective mailing sleeve and searched for the mistake. As you may not know, I am a graphic designer and searching for printing errors is a hobby. The statement, made in the forum, refers to the printed date next to Even Better Than The Real Thing, which states that it was recorded in Mexico on the 15th of November in 2011. The date doesn’t jive. U2 played Mexico in May of that year and the tour’s completion was in August of 2011. The band was on vacation by November so something was wrong.

I am not here to criticize the proofreader or the designers because these things happen all the time. Trust me, it has happened to me on a few occasions. Luckily, some of my mistakes were caught as we were going to press, but in this case, it wasn’t. So, I ask is this a collectable, such as Billy Ripken’s 1989 baseball card with the expletive written on the bottom of his baseball bat? Probably not, as I do not seeing this piece being reprinted for the masses. Instead, U22 is a collectable for all of us to cherish, regardless of the printing error or not. The booklet, and discs, commemorates one of U2’s finest achievements in touring, next to ZOO TV, which non-U2.com subscribers can admire from afar.

In closing, we live in a fast paced media world in which mistakes like this happen more often than not. Grab any magazine as you are checking out of the grocery store and look at all of the syntax errors in the headlines of advertisers. That alone would drive any English teacher absolutely crazy. In our case, it probably was human error and I forgive the oversight. Instead, the two discs of live tunes included in U22 will forever remind me how I went from the back row on the Joshua Tree tour in Iowa City in 1987 to the pit on the 360 tour. It took me 22 years to get there and that is why I will cherish U22.