I stand up to your comedy 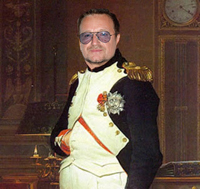 You really do not need to impress me. Seriously, I have no time for what your did in you life. Unless, it came to a bountiful result that helped others.

It’s a harsh opening statement to this blog, but it’s one that has stuck with me for a few months due to an incident earlier this year, which I will get to in a moment.

We all find ourselves in uncomfortable moments in life and thank God we have U2 to help us through them. What makes U2’s music and lyrics unique is that we can bond with them in any given moment in our lives. Something can pass in front of our eyes and we can turn to a snippet of a lyric and say, “Yeah, they get it.” Many a theorist, rabbi and die-hard U2 fan have dissected the the U2 catalog, which is not what I am going to do here in any way, shape or form. What I want to share with you is how we are less about humility in our lives and more about ego.

Take for instance why Stand Up Comedy is rattling in my head. A few months back, I was in a social situation where egos were suffocating the conversation. Instead of responding to me, I was frustrated by their ongoing betterment of themselves through statements, “This is what I did.” It was textbook Webster dictionary narcissism at its best. I couldn’t believe that I had no way of counter acting their conversation because the person across from me wouldn’t have been impressed no matter what I had done. I could have said “I had an internship as a plumber in London the summer of my junior year in college and had to rescue the royal plumbing system ’cause the Queen took an over sized shit and clogged the loo.” It would have hit the ground and died a tragic death. And that’s when I needed a therapeutic answer for the issue at hand. I said to myself, like most of us U2 fans say, “there is a U2 lyric to get me through this.” And, I was right.

Although I was no big Fan of No Line on The Horizon at the time of its release, I will say a few songs from that album resonate with me. Stand Up Comedy is one and I gravitated to it immediately after the meeting. The simple line:

Stand up to rock stars, Napoleon is in high heels
Josephine, be careful of small men with big ideas

Albeit this is a personal reflection, I’m sure, of Bono to his wife, and or others, for his faults of being a little man with big ideas. To me I see none of it because I have yet to see a major Waterloo in Bono’s life. As for my situation, it was just the line I needed. I took the lyric and ran with it. Affirmation to the ego I was dealing with came to me later the next day. I wished that I had it in myself to stand up on the overflowing, beer can collecting trash can next to me, look the chest beater in the eye and sang, “Napoleon you’re in high heels. Your Josephine should be careful of you and your big ideas.”

Well, it is a fantasy and we can have them because we have a solid toast master who writes some profound stuff that gets us through life.