by Eric
ordinary love, The Hands that built America, U2
0 Comment 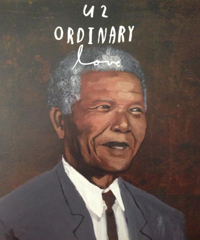 While U2 fans around the world are waiting, with the utmost patience for a new full-length album release, the band gave us a soundtrack single, recorded for the movie Mandela: Long Walk to Freedom. The song I am speaking of, Ordinary Love, has been floating around the Internet for the past few weeks in various incarnations and now, we can finally put it on our record players while comparing it to other U2 one-offs in a very open light.

Before I proceed, we need to look at other soundtrack songs that U2 have created for movies, most notably The Hands That Built America, for the movie The Gangs of New York and Hold Me, Thrill Me, Kiss Me, Kill Me, from Batman Forever. Each of these tunes were released between albums, but I’m not sure either had the anticipation level as Ordinary Love has in concern to their long absence of from a full fledged release. Why you ask? Each of these songs wasn’t caught in the mix of the band trying to flesh out new material. Hold Me, Thrill Me, Kiss Me, Kill Me originated as an idea during the band’s Zooropa album sessions and then later became a song for the movie when asked to score a song. The Hands That Built America, on the other hand, was actually scored for the movie Gangs of New York, much like Ordinary Love, because it gave them an opportunity to work with Martin Scorsese, which brings us to the discussion of how U2 formulates score material.

If we took both compositions, Ordinary Love and The Hands That Built America, and listen to them back-to-back, they would seem to be one in the same. Both use a three-chord melody intro that ignites the tune and start the ignition switch to Bono’s lyrics. One solid note on both songs is that Edge has abandoned the guitar in both songs and supplanted himself behind the keyboard as musical director. Now, I know that these are soundtrack tunes and there really is no area for them to push beyond the creative scope as they would for album work. However, U2 has found a formula and are milking it while we gaze at their wonder, hoping for anything new from the band.

What I want to do to prove my point about U2 soundtrack formulation by visiting The Hands That Built America’s album companion Electrical Storm, from U2 – The Best of 1990-2000 release because we will see a common theme in lyrical narrative and composition to Ordinary Love even though Electrical Storm isn’t a movie soundtrack tune, but could easily apply for one.

Let’s review the opening verses below:

As we see, Bono sets the narrative in both songs, using the sea as a metaphor. We know he comes from Ireland where the sea has played a vital role in many an Irish literary work, yet he seems to re-examine it as though he is drawn to it whenever melancholy is needed.  In the case of Ordinary Love, Bono’s rehashing of the aquatic metaphor is laughable because we know that the city of Johannesburg, where Mandela grew up, is land locked and nowhere near an ocean, which is where I make my stand on this song not being a stellar U2 track. Even more important is how the melody tends to take the same navigational map in Ordinary Love as it does in Electrical Storm. There is no triangle being played in Ordinary Love, but there is syncopation in the background, that is setting the song up for the Bono’s spoken lyrics, is much like melody, which exists in Electrical Storm.  In my mind, and I am sure you will agree once you listen to them side-by-side, that the U2 xerox machine just hit copy.

I know it’s hard for this long-time fan to make these unsympathetic statements about a band we all like, but it is an honest critique. What really scares me is how U2 dialed this song in as they were in the midst of working on a comeback album. An album that I hope has a new sonic vision, such as what was delivered to us on Achtung Baby or Pop. Harsh as I sound, U2 needs a kick in the creative ass and needs to release us something that trumps the last three projects. As I have said before, All That You Cannot Leave Behind was a way to bring back those they left behind after Pop and subsequent releases have failed to bridge significant sea change in the U2 aural/narrative creation (Sorry for the pun, but if he can use it, so can I). However, the argument can be made that they can still fill stadiums and I agree, but by the third leg of the 360 tour, only a few songs remained from the No Line On The Horizon release, a telling tail that this band has to create an album that needs to revolve at least 180 degrees from the previous.