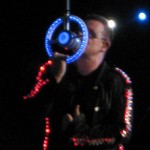 On the opening night of U2’s 360 tour in America, there I was, in the pit and feet from the stage. It seemed like a long journey to get this close to my band in a live setting. Yes, I had met them on the streets and have a lot of autographs to prove such, but twenty-two years earlier, I sat at the back of Carver Hawkeye arena, catching a one-off show for U2 on their landmark Joshua Tree tour. On this night, however, Irish luck was on my side and worth the wait to be so close to Edge, Larry, Bono and Adam. My wife, standing next to me, could feel the rush of excitement and knew how big of a night tonight was going to be for me. She too is a fan and when the lights dropped, she swam in the pool of exhilaration with me.

As I stood in the inner circle, I was in the throes of working on my memoir, I’m A Fan: How I married U2 into my life without going to the altar and had no clue what was in store for me in the coming months upon its release. However, on this night, I was to take it all in as the band move through classic U2 songs interspersed with new cuts from their recent release. To say it was an intoxicating evening is to say the least for me. U2 pulled out all the stops in creating an intimate affair in an outdoor football stadium packed to the rafters with fans and those wanting to see what all the 360-degree tour was all about. Unbeknownst to me, the thrill of the show came at the beginning of the encore when the stage was dark and a circular object embedded with LED light came from the heavens and met Bono wearing a suit of lights. U2 were circling back to their classic album Achtung Baby and dipping their toes into the resurrection of a great tune ¬– Ultra Violet (Light My Way).

Ultra Violet (Light My Way) was a fitting song to begin the end of a celebratory evening, but of course, any song could have done this because the band has such a deep catalog to dive into. Instead, they chose this song of intimacy, which is what the 360 stage was trying to emulate, and made it more personal. The song, Ultra Violet, is a conversation about seeking the guidance of light at the end of life. Having Bono, singing into a microphone encased in an almost steering wheel like device and illuminated by LED lights, was the appropriate way to marry the metaphors in the song with the theatrics of the singer. It illuminated his face just so and made him seem angelic. The concept between design and execution worked and it seemed the band had come a long way since my first live encounter with them on the Joshua Tree tour. I too had my own journey as a fan of the band and in the coming year, thanks to my soon-to-be-released memoir about being a fan of the band, I would become connected to the illuminated microphone Bono sung into and begin to build a long-lasting friendship with its design team.