The Boy of War 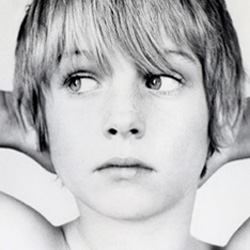 Peter Rowen is the iconic boy on the cover of U2’s War album. He is the younger brother of Bono’s good friend Guggi and is the only non-U2 subject to grace the covers of their records, which makes for an interesting discussion about album covers. What is it that makes an album great? Well, it’s the songs, but coming from this graphic designer, I have to say the imagery has to follow suit. Nirvana’s Nevermind is an album cover that comes to mind immediately for its iconic status. What is even cooler for this discussion is that Nevermind has commonalities with U2’s War album. Besides children gracing the album cover, both were breakout records for their respective careers and delved deep into a darker side.

Since I am only discussion imagery in this blog about War, let’s step back for a moment and dissect the image gracing the album’s cover. It’s a tight crop of a stark looking youthful kid staring right at you. The expressionless face is one lip quiver from sadness that you cannot run away from no matter what. Just looking at the image we can figure out that he has one arm bent around the back of his head and I assume the other as well. Is he kneeling or standing? We don’t know, but the boy’s eyes are telling us that he is the gatekeeper to the record at some cost to him. And, what is the price he paid you ask? He could have lost his parents or been separated from his family. It’s hard to identify his situation other than he has been placed next to a word that hits home – war. A harsh word that means many things, but in this case, we can assume the worst as it reminds us of those old photos of wars such as World War II. What is interesting is how this sets us up for what we will find when we peel back the shrink wrap and place it on the turntable for the first listen. From the marching drumbeat that opens Sunday Bloody Sunday to the last cymbal crash of “40”that bleak stare stays with us.

After reading many articles about Peter Rowen, it seems as though he outgrew this iconic image. He has stated that he does not own this album nor the Boy album for which his face graced a few years earlier for U2. He went on about his life, as he became an icon to all of us, and to those just mindlessly flipping the record racks at the now almost forgotten record store. I do, however, remember his face on the backdrop of the stage set at Red Rocks in U2: Live Under a Blood Red Sky. It was as if Peter became a fifth member of the band. In fact, it’s fitting to grant him that more than any other who has come across the U2’s creative path in their 30+ year career. You could say that Steve Lillywhite, Brian Eno or Daniel Lanois crafted the sound of U2. Yes, you can add Anton Corbijn and Steve Averill as crafting their image, but one can honestly say that it is the stare, seen by millions, but owned by one – the boy of War – that broke out U2.