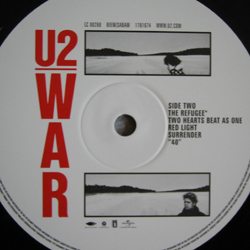 Birthdays, anniversaries, the holidays and the like, creep up on you in odd ways. One year you are newly married and nine years later you are like where did the time go. I feel that same way with U2’s War album. As we are about to celebrate its 30th birthday, (pearl if you are celebrating wedding anniversaries), I really want to know where the time has gone.

After reading many articles about Peter Rowen, it seems as though he outgrew this iconic image. That did not come until about 1984, which would not make this year its 30th for me. However, three decades is a long time. I have witnessed countless wars, or as I call them police actions, seen the advent of the portable phone, which gave way to the cell phone. I have seen the 80s, hair metal, grunge and boy bands come and go. Yes, sadly, I witnessed the slow death of the LP, which is how I bought the War album in the first place. Actually, I got it from one of those record clubs as I was not sure I was going to like it.

Before we go any further, let’s get this straight. Vinyl to youth today isn’t really understood as it is not the vinyl we grew up with. I can say that because back in the 80s we did not have vinyl, iPods, CDs and the cloud as listening options. We just had vinyl. Well, we had the whirring of cassette tapes and 8-tracks. Well, 8-tracks were starting to litter their own graveyard as a has been, but back to the point of vinyl. We had to flip it over the album in order to get to the other side, which let’s me state that it was that backside of War that did it for me. I fell in love with the song The Refugee. Yeah, I was a New Year’s Day fan but The Refugee was my fave. In fact, I can site a couple reasons. The first is how primal the song is in tempo. More so than any other U2 I had heard up to that time in my young fandom and thereafter. I find Mullen’s drumming to not only be of march tempo, but that of tribal punctuation. The cadence Larry carries is accentuated by Edge’s guitar in which he punches the chords and lets them trail off. Lastly, Bono’s vocals are one of anger as though the central character, a woman who is the refugee wanting to leave her country for America, will never make the ship he sings of in the first stanza. Each following stanza he sets her up for disappointment as though this is the life of a refugee. Since most of the album is about “war” or conflict, this song expresses the one of the outcomes, being a refugee.

I can only describe this song from what I read in the lyrics while also putting it into context with the other tunes on the record. Ironically, The Refugee is the only tune from the album that I cannot obtain any information about anywhere on the web. All the other songs, on this great record, have paragraphs of copy discussing their themes, influences, or religious implications, but this song has not a word. Let me take this a step further and say that I have consulted my U2 reference library and have found out that it was hardly ever played live, which has really pricked my ears of interest. In other words, it was a filler song along the lines of Achtung Baby’s Acrobat or recently the song Wild Honey from All That You Can’t Leave Behind. Both are solid tunes but they do not have the resonance of The Refugee. Call me a crazy, mid-life U2 fan who wants to throw a birthday party for, not just the album, but for the one lost track that exists on it as the ugly duckling because I feel it’s owed it’s due.